The Hub School is the crown jewel of the Jaffer family's commitment to education in Pakistan. Education has been a legacy of the Jaffer Family and it has continued with the building of The Hub School, a non-profit boarding school for 800 boys which has surpassed existing standards of educational excellence in Pakistan .

MESSAGE FROM THE FOUNDER

Ever since completing my tenure as Pakistan High Commissioner to U.K. in 2003, I have nurtured a dream to continue our family’s century-old commitment to education. The Islamia School in Pune was founded in 1907 by my great grandfather, Khan Bahadur Haroon Jaffer. My grandfather, Sir Ebrahim Haroon Jaffer, organised the first Muslim Educational Conference in 1920. My late father, Ahmed E.H. Jaffer, introduced reforms as a member of the Indian Legislative Assembly in 1940. Later, after partition, he raised several bills and motions in the Pakistan Legislative Assembly for improvement and increase in the allocation for Education. Education has been a legacy of the Jaffer Family to Pakistan. It will continue with the building of The Hub School, a non-profit boarding school for 800 boys which will surpass existing standards of educational excellence in Pakistan. 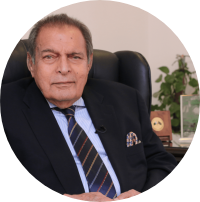